The Maillol museum reopened its doors after eighteen months of renovation.  Founded in 1995, the museum was opened and operated by the muse of the painter Aristide Maillol, Dina Vierny. She displayed her personal collection of Maillol's work and presented some modern art exhibition.

Aristide Maillol (1882-1944) was influenced by Pierre Puvis de Chavannes and Paul Gauguin.  The artist group "Nabis" influenced his early paintings and tapestry design. In the early 1900's an eye disease forced him to solely focus on sculpture.  The main subject of his sculpture was the female nude.  His compact, voluptuous female figures, reminiscent of Gauguin's women as well as of Renoir's later nudes, considerably influenced European and particularly German sculpture. Maillol is often called the Cezanne of sculpture.

The foundation signed a new contract with Culturespaces, which produces exhibitions for French museums including the Musée Jacquemart-André in Paris.  In addition to the permanent collection on the second floor of the museum, a retrospective for the French artist Ben (Is Everything Art?) will be held until January 15th. 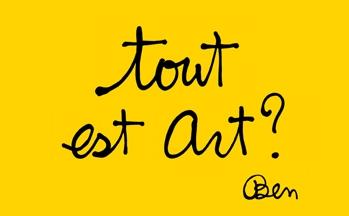